Comparison of operating ratio of lockstitch sewing machines in Bangladesh

Loss of 110 hours per sewing machine.

The operating ratio of S-7300A & S-7250A differ by around 5% per day. This can make a difference of 20 minutes a day, or more than 100 hours a year, and has a significant negative impact on output volume. Both models are equipped with DigiFlexFeed, which is highly regarded in the market for its superior productivity over competitors’ lockstitch machines, but the data shows that S-7300A’s productivity is 30% better than S-7250A. 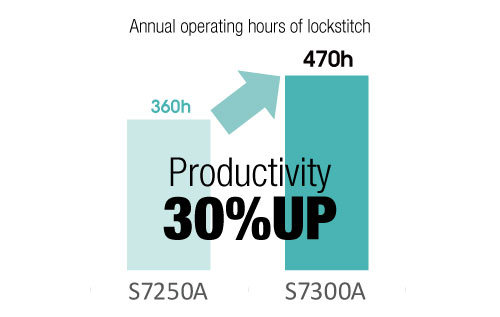 S-7300A has larger arm pocket and automatic material thickness sensor, which S-7250A and other manufacturer’s sewing machines do not have. The sensor detects the thickness while sewing and prevents clogging, so no need to slow down when sewing steps, keeping productivity high.

There was also a large difference in daily maintenance time. While S-7250A takes 15-20 minutes,S-7300A takes less than 10 minutes. S-7300A has a color LCD touch panel, which makes it easy to respond to errors and make various settings. S-7300A has been highly evaluated due to the low downtime by technical staffs of sewing factories around the world.

Learn what NEXIO SYSTEM is

Inquiry about price or technical support on sewing machine

Go back to TOP